Let me preface this post by stating unequivocally that I own both the original iPhone 4 and the iPad2, and I recently purchased both a Macbook Pro and Air for my son and wife respectively, so I am not by all counts an anti-Appleit, although I still use an Intel-based desktop machine at work, where I do most of my serious work.

But seriously, Apple, do you really think this new product release was a good idea?  How long have rabid Apple fans been waiting for yesterday’s announcement from the marketing saavy technology gurus that you have taught us you are?  Millions of faithful minions waited in anticipation, with bated breath, scouring the blogs for any leaked news of the brand spanking new “iPhone 5”: rumors of sleek new teardrop designs and a larger edge to edge screen with higher resolution circulated around the blogosphere for months.  There we photos of cases from manufacturers showing a larger body design.  There we photographs of mockups of the new “iPhone 5.”  There were SKU’s from Best Buy and Amazon showing the new pricing structures.  None of these stories or photographs were leaked accidentally on purpose, I’m sure.

So what was the reward for the patience of the inquisitive Apple fans?:  an incremental hardware update that merely catches up to the technology Android phones have had for many months now, together with an AI-based voice-recognition software technology purchased from the third party upstart Siri!   Not even enough to really get the full treatment of Tim Cook – responsibility for discussing the new phone fell to a SVP!

You would think that this seemingly obvious faux pas would put some serious doubt in minds of the Apple zealots who have sworn their blind allegiance to the house that Jobs built (Applebots,as I like to call them)?  But even as Apple’s stock declines in response to the announcement – Wall Street was not fooled – I’m sure millions of these Applebots will march happily into the squeaky-clean Apple Stores to purchase this pitiful excuse for an actual upgrade.

So what exactly are the specifications of this new iPhone?  It is the iPhone 4 with an upgraded duo-core processor and an 8 megapixel camera (with “improved optics”).  That’s it.  Nothing earth shattering right?  Nothing, as I said, that Android phones haven’t had for many months now.  There were at least four Android phones in the U.S. marketplace that had these specifications six month ago.  Oh yes – lest I forget – the new iPhone 4s boasts an “improved” operating system – iOS 5 – that “introduces” Siri – an artificial intelligence-based software it purchased just a few months after the upstart company of the same name released the iPhone version of the application! 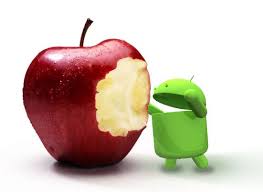 I don’t know about you, but I tried Siri on an iPhone 3s many moons ago and quickly deleted it from my apps for lack of interests.  Still, it’s different Apple says, because we’ve integrated into the OS.  Many pundits – not paid I’m sure – are calling Siri a revolutionary product:  a “most exciting” artificially intelligent personal assistant app built into the operating system.  One blogger even dared to credit Apple with a “mind blowing” prophecy of the advent of this kind of interactive voice/touch technology back in the 80’s with the release of a video called “Knowledge Navigator” (see this Techcrunch post by Rip Empson).  Another blogger describes the software release as a “world-changing event.”  Is it now?  Let’s explore that assumption:

Siri started operations over four years ago, in December 2007.  It didn’t receive serious VC capitalization until late 2008 – though that’s not bad for an upstart.  The application was released without much fanfare and, as I said, had less than stellar performance as an app.  Nonetheless, Apple acquired the company in late 2010, in the midst of the growing rumor grist about the iPhone 5’s impending release in June 2011 (Apple’s old release schedule).

So, my question to the bloggers who acclaim the amazing merits of Siri is this:  If Apple had the vision of this kind of application when it built the prototypical “Knowledge Navigator” in the late 80’s, why wasn’t it incorporated into their early devices (read, failures?) such as the Apple Newton?  Better yet, why wasn’t something similar incorporated into earlier versions of the iPhone?   Ah, you might argue, the technology hadn’t been invented yet.  This is new stuff from the minds of Apple.  They ad the prophetic foresight to recognize the merits of Siri and purchase the product.

Not so fast.  If we are going to bestow the moniker of to prophet on anyone with regard to the oracle of artificial intelligence, let’s start with Gene Roddenberry, whose tremendously successful Star Trek series foreshadowed humans talking to reasonably intelligent on-board computers that could understand, analyze, evaluate and respond to instructions better than any iPhone app – and long before the late 80s!  “Computer, what is the weather going to be like on Alpha Centauri?”   A sweet voice replies:  “Captain Kirk, the temperature on Alpha Centuari is approximately 5790 Kelvin.”  Or how about George Lucas, who in terms of a “Knowledge Navigator” conceived of C-3P0 years prior to Apple in the movie Star Wars.  C-3P0 was the lovable “protocol droid” who was fluent in over six million forms of communication, and interacted with humans to assist them in understanding etiquette, customs and translations as they gallivanted around the galaxy.

But, in terms of real world application and, dare I say true prophetic vision, let’s get really serious and discuss the work of John McCarthy and his team at Dartmouth College beginning in the mid 50s!  That’s when artificial intelligence was more than just prophesized, it was actually conceived, designed and implemented.  Indeed, some would maintain that the field of Artificial Intelligence was actually born there in Hanover, New Hampshire.  McCarthy and his team designed systems that would ultimately speak English better than most Americans and deftly work out complex mathematical problems and verbally solve intensely sophisticated logical theorems.  By comparison, Apple’s latest iteration of Siri is no more than the most recent iPhone version of that “Hello Teddy” bear that was so popular in the 80’s!  “Let’s play a game.”

One last gripe of mine that is slightly off topic:  why on earth, Apple, would you release a new iPhone model that IS NOT 4G COMPATIBLE?  Where is your sense of being a leader in cutting edge technology?  I understand, you don’t have to be.  You’ve sold your product to your minions of Applebots and you will continue to do so:  but don’t you have any pride?

Now, if I take a moment to step down from my soapbox, l can say that I see the tremendous value of Siri, and have as one of the early downloaders from its humble beginnings as an app.  But where I have to part ways with the Applebots is when they start describing the application as “earth shattering” and “mind blowing.”  What McCarthy and his team was mind blowing.  That research was years ahead of its time when computer technology was still in its nascent phase.

In fact, I question whether Siri even has enough pizazz to sway those patient early adopters who have been waiting for months to purchase the “new” iPhone.  This is why I ask “Siri-ously Apple?”   Now, those poor misled people are left with only two options when it comes to the purchase of a new phone:  (1) buy the incremental upgrade to the iPhone 4 or (2) wait 8-12 months for the real iPhone 5 to be released.  The problem is, if they do wait, these people will still have no certainty of what features the next release will have or whether it will be yet another incremental upgrade (perhaps with 4g capabilities, hmmmm?).

And that brings me to crux of my point at last:  there is a third real and very viable option:  they can choose to buy an Android!  Why wait for the new technology that might be on the iPhone 5 in 6-8 months when the technology is here right now.  No longer are Android phones second fiddle in terms of design.  They have really nice, 4+ inch screens with super amoled screens and dual core processors boasting performance beyond that of the iPhone. They have – Apple forbid – external storage.  The can run flash programming, which is still a prominent feature of the web, despite Apple’s stubborn refusal to incorporate it into their phones (ask yourself, why can an Apple desktop run flash programming, and yet an iPhone or iPad cannot?).  Many model are, in fact, vastly superior to anything Apple has on the market.  In fact, as of August 2010, Android sets overtook iPhone sales by a margin of 27% of all U.S. phone sales as compared to 23% for Apple (Source: Nielson Company).   Judging from initial reports about the disappointment over Apple’s latest offering, this trend is likely to explode in the next few months as Android manufacturers begin to release their latest offerings for the holiday season.

But, a true Applebot may say, what about the millions of apps that are available for the iPhone?  Recently reports indicate that there are approximately 400,000 apps available for the iPhone as compared to just over half of that for Android as of this month.  If you remove all the really useless apps from Apple – tilting beer mugs, fart machines, etc. etc. – then the numbers are even much closer than that.  There are very few productivity applications that are available on the iPhone which are not available for the Android.  The Android even has a slew of artificial intelligence based applications that can perform many of the same functions as Siri, although not as integrated into the system.  Finally, if we count in terms of downloads, Android is actually the winner:  it overtook iPhone last month with just over 8 million applications downloaded.  So, this is not such an issue anymore.

Bottom line:  Apple is losing its spark.  It is losing its sex appeal.  For the first time in a long time, it is losing its market saavy, which will soon show up in market share.  Alas, it is losing touch with the consumer.  Most in the majority are NOT Applebots.  They don’t blindly purchase anything Apple throws out for consumption the way teenagers blindly purchases Dr. Dre headphones that are vastly inferior to almost any other headphone on the market sold at a third of the price.  We evaluate.  We compare.  When he or she can buy, just as an example, a Samsung Galaxy IIs with superior specifications as compared to the latest, newest iPhone at the same or lower prices, the typical consumer begins to see the flaws in the fairy tale that was Apple.  And perhaps those millions that waited patiently for the iPhone 5 will look elsewhere, beyond the incremental, “catch-up” upgrade.  A recent article in the New York Times points out this strong trend in consumer behavior that is likely to be fueled by Apple’s incremental reasoning.  With it’s lackluster announcement, even Apple’s new deal with Sprint may not be able to save them from the consumers’ inevitable recognition of this new design for what it is:  a mere incremental upgrade.  It’s sad to see the iPhone fall into that same loop of incremental upgrades that both the MacBook and the Air have been stuck in for years.  Nothing exciting, just speed boosts and software tweaks.  Yes, it’s faster.  Yes, Lion is pretty.  Yes, like the app screen – but it’s nothing astonishing.  It’s sad that Apple is becoming nothing more than one of many.  They used to have an edge.  And perhaps that is the most sad fact of all:  Apple has shown us nothing in this upgrade that is earth-shattering or mind blowing.  And, after all, that’s what we have come to expect from Apple isn’t it?   Siri-ously!